How To Check ABS Codes

The ABS electronic control module (which may be referred to as an EBCM "Electronic Brake Control Module") is a microprocessor that functions like the engine control computer. To troubleshoot the ABS system you may need to check the codes stored in the EBCM. You must short two pins on the ALDL connector located under the dash on the drivers side.


Checking ABS codes cannot be done with code scanner or through the Reatta diagnostics screen.
ABOUT CLEARING ABS CODES: ABS codes are stored in non-volatile memory. You cannot clear the codes by unplugging the ECBM, disconnecting the battery cables or turning off the ignition switch.  To clear the ABS codes you must drive the car over 18 miles per hour and they will automatically be cleared if you have repaired all problems that caused the ABS trouble codes to set. If you drive the car greater than 18 miles per hour and the yellow ABS light comes on the ECBM is still detecting a problem and codes will be present when you check the codes again.
The ECBM will not allow the codes to be cleared unless ALL codes have been read.

How to enable ABS diagnostics:

With the key off remove the ALDL cover to expose the terminals as shown below. 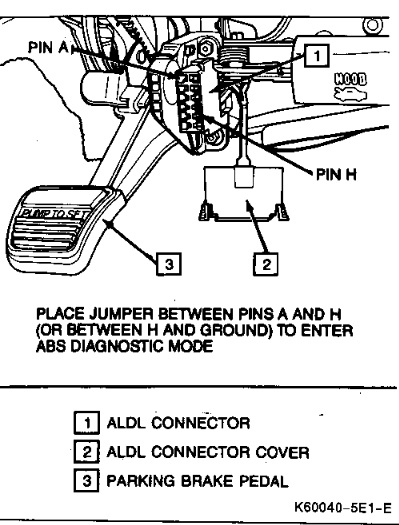 The photo above shows terminals "A" and "H" jumped on the ALDL of a 1989 model Reatta.

1988 models use different terminals (A&G) but the procedure for jumping the ALDL is the same.

Using a piece of wire or a small paper clip, jumper the following terminals in the ALDL connector:

ANTI-LOCK light will turn on for approximately 4 seconds then turn off. Display of blink codes will then begin. Each digit will be blinked out by a .5 second flash of the ANTI-LOCK light. There is a 1.25 second pause (light off) between each digit.

Code "12" will blink out 3 times in succession. This is not a fault code, but indicates ABS diagnostics has been entered.

After code "12" has blinked out three times, any stored fault codes are then blinked out, each with a 3 second pause between. After any and all codes have displayed, the sequence repeats.

Refer to the Field Service Manual (FSM) for interpreting the codes and troubleshooting the ABS system.