If the freon charge drops too low in the A/C system, the low pressure switch signals the BCM to lock-out the compressor to prevent damage from running with a low charge. When this happens a code B447 and/or B448 will be set and warning message will be displayed in the IPC. The only way to get the compressor to run again is to clear the codes. The best way to clear these codes is by disconnecting the negative battery cable for about a minute and then reconnect. Before attempting to add freon again do the following:

If the freon is really low the code might be set again after a few seconds and disengage the compressor before you can add enough freon. If that happens there are two ways to temporarily get the compressor to engage long enough to get freon in the system.


The following instructions are only intended to keep the compressor running temporarily while filling the system that is low on freon. This procedure should not be used for any other reason! Damage to the system could result from misuse.

The best way to keep the compressor engaged is to remove the connector from the Low Pressure Switch and place a jumper between the two terminals in the connector. Then clear the codes by removing the battery cable as described above and the compressor should continue running long enough to fill the system with freon.

The following photo shows the location of the Low Pressure Switch. You will need to remove the plastic cowl cover to see it. Note that it is located in the large AC line. Don't confuse it with the Low side Temperature Sensor.

When you have the connector removed, there will be only two wires in the connector. Just putt a short wire (large paperclip) between those terminals. (No need to apply 12 volts from an external source.) Then reset the codes by removing the battery cable and the compressor should run while you install the freon. Don't forget to remove the jumper and replace the connector on the Low Pressure Switch when you're done. 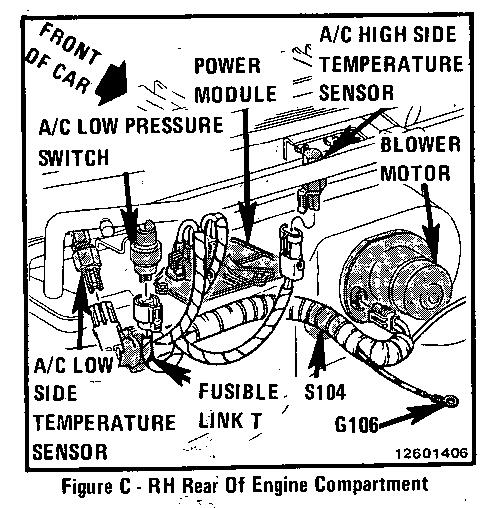 In some situations the above procedure may not work. If that is the case jump 12V directly to the clutch from the battery (easiest to do at the relay socket).

Caution should be used when applying 12 volts directly to the compressor. Never attempt to attach the jumper with the engine running.