Instructions for cleaning the EGR Valve 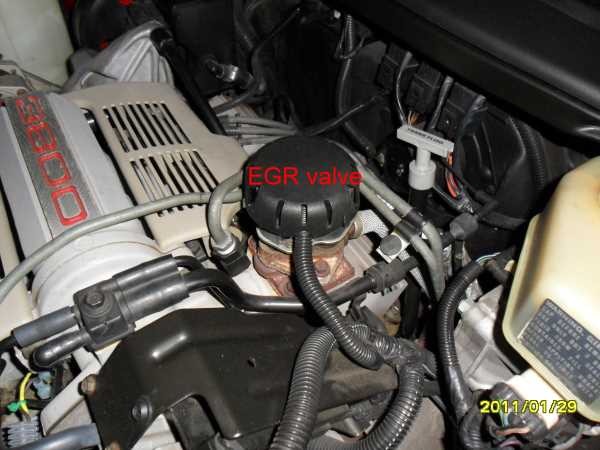 Undo the electrical connector on the top. The EGR valve is bolted to the rear of the engine with 2 nuts on studs (if I remember correctly, if not bolts). Remove nuts. There is a gasket between the housing and the EGR valve. Carefully giggle the EGR valve free. It is a hefty piece of metal and will weigh more than you think.

Remove and set the gasket aside. You will be able to reuse it again. You will see 2 or 3 channels in the bottom (something about that failing memory having not done this recently) Remove as much of the carbon as you can. Scraping, brushing and using fuel injector cleaners etc.

Next remove the three long bolts/nuts with torx heads and the iron core end solenoids separate from the bottom body where the channels are. you will recognize it when you see it.

You will be able to remove the 3 solenoids. I would recommend one at a time as I would prefer that they went back into the same hole. Wet a paper towel with fuel injector cleaner and clean off the solenoid. It to me looks like it is ceramic. I believe that the dirt you will be removing is a combination of carbon and iron oxide (rust).

Next take another paper towel that is damp with fuel injector cleaner and insert it into the hole the solenoid came out of. Again you are removing carbon and iron oxide. My belief is that as this builds up it just might bind and interfere with the proper motion of the solenoid. Repeat with the other two holes and solenoids. I put them back in dry. I don't think that any lubrication is required. With hot exhaust gasses flowing through the valve it would probably cook any normal lubricant that you used and cause the solenoid to seize.

At the end of the solenoid is the pinttel (I think that is what it is called?) In any event remove as much of the dirt from them as you can.

There will also be a steel plate with three holes in it that the pinttel seals to and the solenoid open as per ECM signals. Clean the seats very well. As I recall I kept them wet with fuel injector cleaner and just kept moving the parts together in a figure 8 grinding motion until all the carbon gunk was removed. This will seal the chambers better than before and it will also allow the ECM to control the opening and closing (sealing) better.

In any event I found that there was dirt, carbon and rust that was removed and I believe that I improved the seal on all of the pinttels. Costs just about nothing to do yourself and personally I felt much better knowing the condition. Another reason to do it is because you can!!!

There are other things on the Quad driver. If this doesn't fix the error codes it certainly will not harm anything.

PS If you do this you I would challenge you to take notes, record wrench and bolt sizes and modify my instructions so they will be clearer and a reference material for all. Just an idea???

Sounds much harder than it really is. I would rate it a 2